Everybody has a favorite pizza topping, a favorite type of crust, and a decided preference for pineapple or no pineapple on pizza, but not a lot of people think very hard about the sauces that lay between the crust and toppings. At Dogtown, we’re different. The sauces we use are perfectly matched to the ingredients that top our pizzas, resulting in mouthwatering flavor combinations. Read on to learn about different pizza sauces, and the best toppings to put on them! 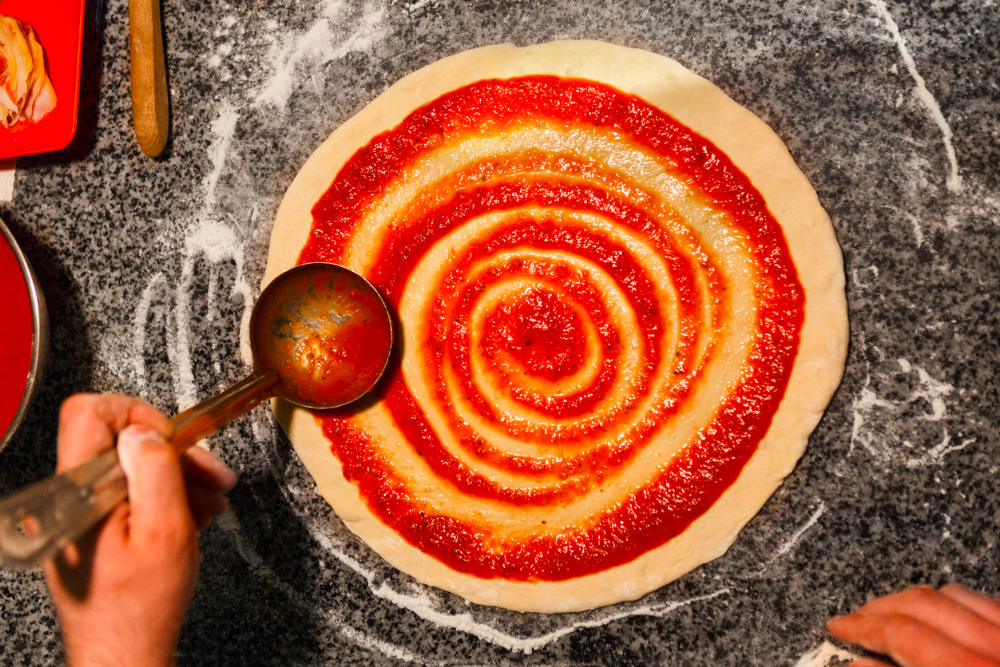 You can’t go wrong with a flavorful traditional red pizza sauce. Tomato-based sauces flavored with things like garlic, onion, oregano, basil, and much much more, red pizza sauce is the go-to choice for many people. Now, this may seem pretty straightforward – it’s just sauce that is made from tomatoes, right? But there are thousands of variations of red pizza sauce out there.

Basil, in particular, gives pizza that “classic Italian” flavor. We might be biased, but we love the flavor combination on the Dogtown Tomato Basil Garlic pizza (we thought about adding more toppings, but the sauce really sings on this pizza so we had to stop right there!). If you must, some mushrooms or other vegetables would be a flavorful addition that doesn’t clash with the already-bright flavors of basil and tomato.

Spicy sauce needs something savory to balance it out, so beef or pepperoni are perfect choices. Other good toppings for spicy pizza are sausage, mushrooms, and bacon. If the sauce doesn’t have enough spiciness for your taste buds, add some extra red pepper flakes for more kick!

When a sauce is described as “peppery,” that can mean a lot of things. Roasted red peppers, cayenne pepper, black pepper and red pepper flakes are all common ingredients in pizza sauce, and adjusting the ratios gives different levels of heat and complexity. Similar to spicy sauces, peppery sauces work best with savory flavors, like chicken, steak or mushrooms.

The sweetness in sweet pizza sauce comes from tomatoes and some added sugars (brown sugar works especially well for this). Sweet tomato sauce works less well with both savory, salty flavors. Sweet red sauce is less common than the other sauces mentioned above but is still a favorite among many people all over the world.

Popular Choices That Are Not Tomato-Based 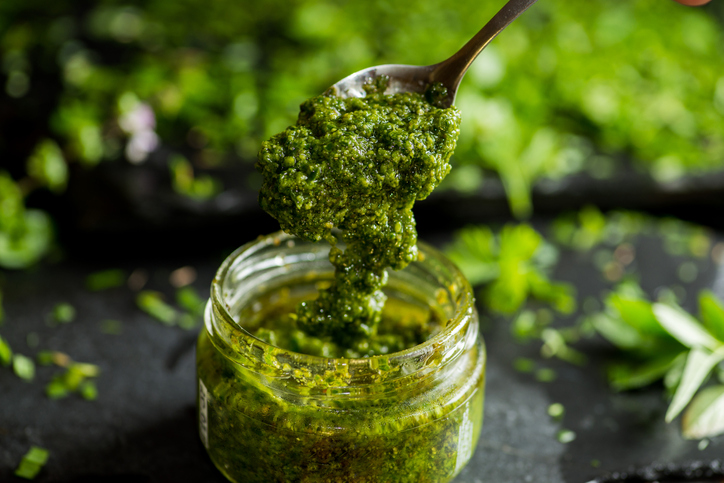 Made from olive oil, garlic, Parmesan cheese, roasted pine nuts, a whole lot of basil and a touch of lemon, pesto is a delicious alternative sauce option for a plain cheese pizza that still packs a lot of flavor! Pesto is great for those who are fans of flavor but aren’t huge fans of tomato sauces. In recent years, people have been changing up their pesto recipes. Swapping out pine nuts for walnuts, adding spinach for extra nutritional value, garlic cloves and more!

If you are a fan of tomato sauce and pesto, take your favorite DTP pizza and add a little pesto to the top after baking – it is life-changing. 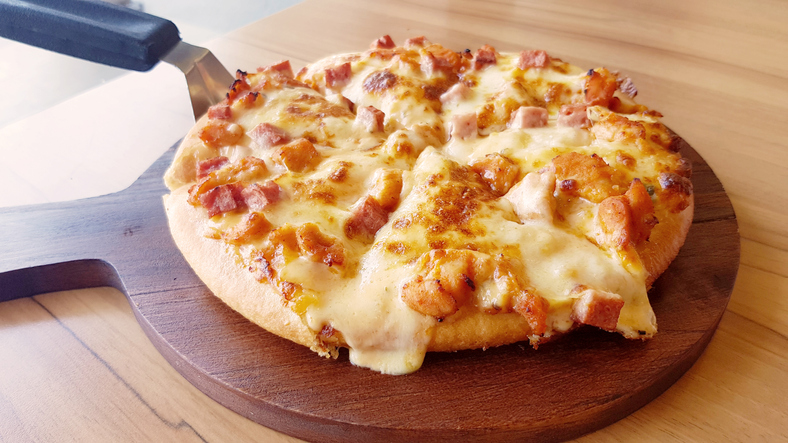 Alfredo is a rich sauce made of butter, heavy cream, cheeses and pepper. It combines well with ingredients that can hold their own against its strong flavor, like olives, artichoke hearts, roasted peppers, bacon, steak, chicken, and mushrooms.

Alfredo pizza lovers let themselves be known whenever a pizza order is being placed. If you have not tried alfredo sauce on pizza, we highly suggest that you give this indulgent sauce a chance!

Like pesto, add alfredo sauce to the top of your favorite Dogtown Pizza. It pairs extremely well with our ooey-gooey cheese and flavorful pizza sauce.

Unexpected (But Delicious) Specialty Pizzas and Their Sauces

The term “pizza sauce” kind of changes once you dive into more specialty slices. Although many people instantly think of red or alfredo sauce when it comes to yummy saucy goodness, pizza makers are pushing the limits on tradition with delicious, unconventional sauces. 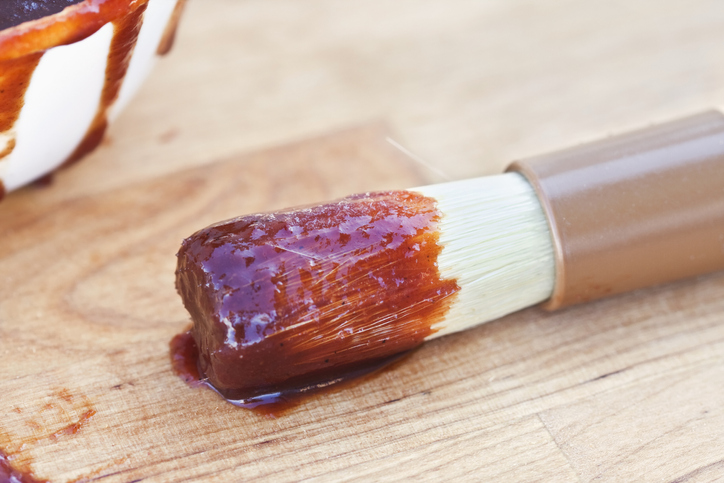 We could probably write a whole article about the different types of BBQ sauce out there, but we like it St Louis style, so we’re going to ignore all the others for simplicity. The best toppings for a pizza with BBQ sauce are any ingredients you’d throw on the grill—we prefer chicken, like on our Dogtown Sweet BBQ Chicken pizza, but bacon, ham, and pineapple are also popular options.

No Bones About It – People Love Hot Wing Sauce

When you hear “spicy pizza sauce,” you might be thinking of the spicy red sauces we mentioned above—but we’re thinking hot wing sauce! Our Hot Wing pizza here at Dogtown Pizza has been a top seller since we released it to the public. Wing sauce is a combination of hot sauce, butter, vinegar, and spices. Hot wing pizzas are best served with chicken and possibly a drizzle of blue cheese or ranch.

This one isn’t for everybody but the people who love taco pizza, REALLY LOVE taco pizza. Taco pizza normally uses salsa and/or refried beans in place of traditional sauces and is topped with Mexican-seasoned beef, cheese, shredded lettuce, and diced tomatoes. It sounds weird at first but it is, for some reason, delicious.

Ranch is something many midwesterners cannot live without. It is normally used as a dipping sauce for pizza but chicken, bacon pizzas with ranch-flavored sauce has become extremely popular in this region of the country. The tanginess of creamy ranch-flavored sauce actually works really well on pizza. Ranch sauces also pair well with a variety of veggie toppings if you aren’t in the mood for meat.

Did we leave any out? What sauce is your favorite? Let us know in the comments below!