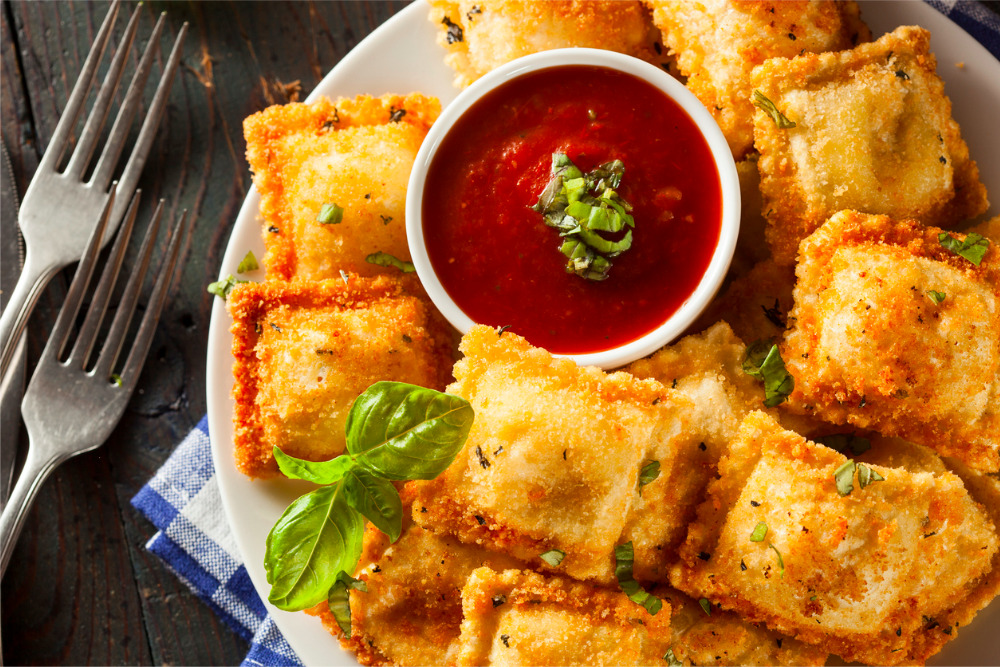 Where are our STL foodies at? This one is for you guys!

You might be surprised to hear many familiar culinary delights claim St. Louis as their birthplace – or maybe you do and just like to learn more about the history of our city.

Let’s take a look at the best traditional foods that the Gateway to the West has to offer.

Here are a few of the favorites that embody the city’s vibrant food scene.

We have talked about this before on the DTP blog, but just in case you need a refresher, the history of St. Louis’ famous pizza can be traced back to the end of World War II. That’s when Melrose Pizzaria began to make Neapolitan style pizza with tomatoes, anchovies, and sausage. Later, Melrose owner, Amedeo Fiore incorporated unleavened crust, Provel cheese, and oregano-based sauce into his signature dish.

What makes this dish one of St. Louis’ unique foods is its size and shape. Pizza makers use scissors to cut the pizza into squares (party cut) rather than traditional triangle shapes for serving. This method supports the slice’s own weight underneath the toppings.

This is an STL staple, called TR by many. Toasted ravioli is attributed to first becoming a thing in The Hill neighborhood. One account credits Oldani’s to creating this delicious fried delicacy – the restaurant was located where Mama’s “On The Hill” restaurant is now. As the story goes, toasted ravioli was stumbled upon when a ravioli from wholesaler Mama Toscano’s was accidentally dropped into the fryer by Chef Fritz.

For those unfamiliar with toasted ravioli, it is just what it sounds like. A type of meat is wrapped in square ravioli pasta, breaded and deep-fried until the pasta shell becomes slightly crispy, dry and golden brown. They should be enjoyed with a side of marinara and a smile!

One of the best sandwiches in America is the Gerber sandwich which debuted around 1973. Ruma’s Deli created this open-face sandwich, named after one of their favorite customers.

The Gerber is a half section of toasted French or Italian bread. The bread is spread with garlic butter and topped with Provel cheese, ham and seasoned with paprika.

Slingers first appeared in breakfast diners in the 1950s. The best slingers in St. Louis combine scrambled eggs, breakfast potatoes, cheese, and crumbled bacon or sausage. Slingers are then smothered with layers of chili.

The inventor of the Slinger is unknown. Many believe the slinger was inspired by the New York dish called “the Garbage Plate.” Some eateries add their own flair and serve slingers with toast or hashbrowns.

Unlike the name suggests, this dish did not originate in the capital of Minnesota. Some believe this sandwich was created by Chinese restaurant owner Steven Yuen. Yuen, a St. Paul native, owned the Park Chop Suey restaurant franchise throughout St. Louis.

In the 1970s, Yuen served this sandwich that includes a fried egg foo young patty, mayonnaise, and lettuce crammed between two slices of bread. This treat is a staple at most Chinese restaurants in the St. Louis metropolitan area. Some restaurants will change up this dish by adding pickles, pork, or beef.

You can’t go to a BBQ in St. Louis without seeing at least one pork steak. This steak is cut from the pork shoulder and was popularized in St. Louis by Schnucks Markets in the late ‘50s. The slow cooking time and a slathering of BBQ Sauce helps tenderize this cut of pork. You won’t be missing beef after you get a taste of a delicious pork steak!

What are some of your favorite St. Louis foods? Is there anything we should add to the list? Let us know in the comments below!